To help Kaiser Permanente members, patients, and employees thrive, the organization has given its cafeteria and patient menus a healthy makeover.

Kaiser Permanente member Lorna Barnes was pleasantly surprised to learn that the curly fries she was eating with her roast beef sandwich at KP Oakland’s hospital cafeteria weren’t actually fried. They were baked. 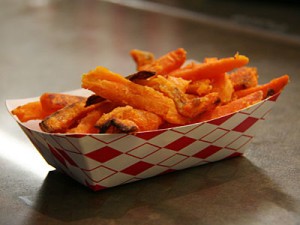 The baked version will soon be everywhere as the organization’s hospital cafeterias say goodbye to all their fryers by the end of the year. The patient menus have no fried food — chicken nuggets, a Pediatric favorite, still exist, but they are baked.

Eliminating fryers isn’t the only health change to hospital cafeterias. For the past three years, 40 Kaiser Permanente hospital and facility cafeterias and patient menus nationwide have undergone a healthy makeover as part of the Partnership for a Healthier America (PHA).

Several years ago, Kaiser Permanente became 1 of 17 hospital systems committed to about a dozen measures for providing healthier food options in hospitals as part of PHA, which the organization helped found in 2010.

The healthier offerings were made in phases; by July, 60 percent of side dishes, entrées, and desserts met the initiative’s healthy food criteria. The healthy guidelines for these entrees mean they are less than 525 calories, among other criteria. 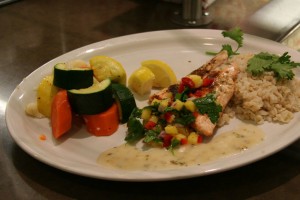 In addition, the main accomplishments of this three-year initiative are:

• Cafeterias now offer three wellness meals, which for adults amounts to no more than 700 calories with a well-balanced mix of grains, fruits, vegetables, a drink, and a lean meat.
• Many sweetened drinks were discontinued, but there are still low- or no-calorie sodas and eight-ounce juices.
• Only healthy food is marketed, and calorie counts on entrees and other items are prominently posted.

The organization as a whole is on target to meet the PHA goals by the end of the year. Removing the fryers is the last PHA change in Northern California, and they will be fully eliminated by year-end.

“We want to make sure our actions support what we recommend for healthy living,” said Edmund Chan, MHA, RD, who has been overseeing this initiative in Northern California until recently. “We are setting an example.”

He said he’s heard feedback, both positive and negative, but even among those who may not fully embrace the changes, they understand that these healthy offerings reinforce the organization’s mission of eating well and good health.

Chan points out that a wide range of options remain, and 40 percent of the patient and cafeteria food doesn’t adhere to PHA’s strict guidelines.

Diana Rosario, RN, is a new employee who eats lunch at the KP Oakland cafeteria. Describing herself as a light, healthy eater, Rosario is impressed with the food at the three Northern California cafeterias she’s visited.

Rosario appreciates that desserts and other not-so-healthy fare don’t take center stage at the cafeteria.

“I can walk away without grabbing a cake or a cookie.”