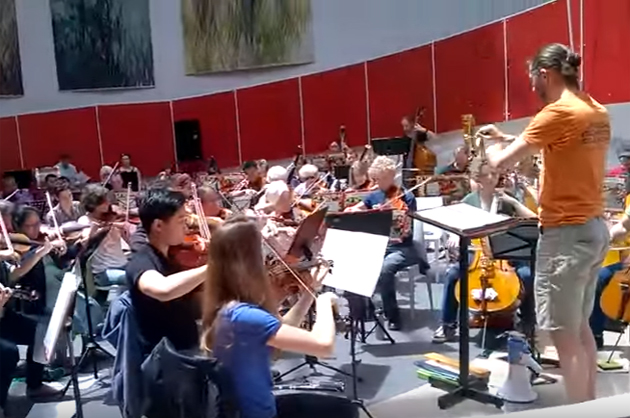 Making a Joyful Sound Together

Grab your instruments, warm up your voices, and get ready to perform in the Kaiser Permanente Reading Orchestra. Pictured above, musicians meet and play in Berkeley in the first in a series of ongoing pop-up concerts.

For Ann Eastman, MD, a violinist and an ob-gyn at KP Oakland, music and medicine have a lot in common.

Both require study and discipline.

Both can become something even greater with teamwork — and both can yield great joy.

So Dr. Eastman, with friend and colleague Betty Lin, MD, a violinist and an ob-gyn at KP Richmond, decided to bring the two together.

The result is their labor of love, the KP Reading Orchestra.

It’s never the same group of musicians, concert performance space, or even music – it’s like a pop-up.

But it does feature one conductor, and the goal is always the same, to engage musicians and audience members in appreciating music.

A Meeting of the Musical Minds

Dr. Eastman met David Möschler after she attended a musical comedy he conducted and the two were introduced by a mutual friend.

Möschler is a tuba player and the conductor and founding artistic director of Awesöme Orchestra, which holds monthly music reading sessions that are free, informal, and open to musicians at all levels.

Dr. Eastman saw that Awesöme Orchestra was the perfect partner for her long-held dream of creating an informal KP orchestra.

“I’d been thinking about it for years, since I know lots of Kaiser Permanente physicians who are also musicians and that many cities have doctors’ symphonies,” said Dr. Eastman, “So many of us have said we should get together and play because music is a fun way to connect and rejuvenate.”

“I’m always looking for events and activities in my role as co-chief of East Bay Physician Health and Wellness,” said Dr. Lin, who helped coordinate the first performance last summer. “I liked the idea of it being casual and fun, making music free and accessible to the general public.”

A Harmonious Tradition Is Born

Dr. Lin began by reaching out to both physicians and employees on Lotus Notes. She was excited to encounter singers, too, along the way.

In June 2015, about 30 Kaiser Permanente employees and physicians turned out to play with 60 of the Awesöme Orchestra’s regular musicians. They performed at the Ed Roberts Center for Independent Living in Berkeley, with Möschler conducting, before an audience of about 60.

Together, they sight-read and performed Beethoven’s Symphony No. 7, Richard Rodgers’ “Carousel Waltz,” and Leonard Bernstein’s “Make Our Garden Grow.”

For Dr. Eastman, it was “so much fun” to perform that day in an open orchestra with both her mother and daughter on viola, and colleagues. “I work with awesome people with whom I don’t get enough chance to interact on this level. Engaging around music is such a gift.”

“It was terribly inspiring and fun to collaborate with KP musicians,” added Möschler. “They were such an awesomely collaborative, patient, diligent group of musicians.”

Since then, some of the physicians have continued to play with Awesöme Orchestra, so now Drs. Eastman and Lin are putting out a call for any and all Northern California Region employees and physicians who play or sing orchestral music to join them for the next Bay Area concert this winter.

Cautioned that she may be inundated with KP performers who want to play together, Dr. Eastman said, “Wouldn’t that be wonderful?”

Watch a clip from the performance!