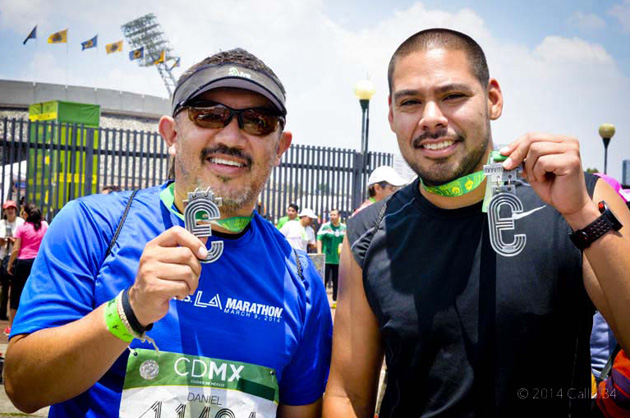 Kaiser Permanente Napa-Solano employees Dan Gutierrez and Daniel Mejia had a long climb to get to marathon-runner status. Then they raised the bar even higher—completing a demanding high-altitude marathon together.

Daniel Mejia and Dan Gutierrez both work at Kaiser Permanente Vacaville, share a cultural heritage, and have evolved into serious runners.

Now they have another thing in common: They each successfully completed the Mexico City Marathon on Aug. 31—although taking different routes to get there.

Mejia, 28, joined Kaiser Permanente as an intern one week after his 2011 college graduation, landing a job by the following year. The Public Affairs representative did light runs until he moved up to half marathons during a local Kaiser Permanente wellness program in February 2013.

“I’ve always had really bad asthma,” he said. “At first, I could only run a mile without my inhaler. But I found the more often I ran, the less I needed the inhaler, although I take it everywhere with me.”

Two years ago while with his previous employer, Gutierrez underwent a Kaiser Permanente health risk assessment. The nurse’s news for him was not good: overweight, out of shape, elevated glucose, high cholesterol.

“It was a wake-up call,” said Gutierrez. “I had to do something, stat.”

That something was running, and it was hard.

“I couldn’t even run around the block without stopping,” he said. “That was my first goal. Then I just kept it up.”

Forty pounds lighter, Gutierrez eventually made it to marathons, which are 26.2 miles. He’d completed five when he got the idea to enter the Mexico City Marathon—with Mejia.

The Mexico City Marathon is not for the faint of heart.

If you’re used to running at sea level, as Gutierrez and Mejia were, you suffer at Mexico City’s 7,000-foot elevation—and hope you can cope with its famed smog.

But the two signed up and then swapped progress reports to stay focused.

Mejia ran distances near his home in Walnut Creek. Gutierrez ran uphill to get ready for the altitude and sprinted to improve his pace.

Gutierrez flew out the Wednesday prior to the race, landing in Mexico City that Thursday to stay with family outside of the city. Later that day a cousin took him to run on a mountain at 9,000 feet.

“He said he was doing it for my own good,” Gutierrez said with a laugh. “It was very difficult.”

Mejia had trouble with his flight, then was confronted with the fact that his hotel was in the middle of a frenetic city.

“There was nowhere to run.”

Buckets of Rain, Awash in Kindness

The day of the race, Gutierrez and Mejia were surrounded by 20,000 exuberant runners, as well as the legendary majesty of Mexico City’s sights as they followed the famed 1968 Olympics marathon race path.

“Right when we were about to start, it began raining like there was no tomorrow,” Gutierrez said. “But I knew when I started that I would finish it. I could see that Daniel could do it, too.”

The two ran abreast for about the first 18 miles, often on cobblestones. Then Mejia fell back. Grappling with cramped muscles and stomach pains from the altitude, he took a detour to the medical tent. As he flagged around the 24th mile, another runner came from behind to talk him across the finish line.

Gutierrez was waiting there. He’d hit the same mile-24 wall, but for him, out of the crowd a young man urged him on.

That night around the fireplace with Gutierrez’s family, the pair shared stories of spectators buying cookies for the athletes, shouting encouragement, or coming forward to rub runners’ tired calves.