Jungon Ahn, RN, was busy raising her 2 children back in 1998 when she did something surprising: She donated the precious little spare time she had—in order to go right back into KP South San Francisco’s operating room on weekends as a volunteer. 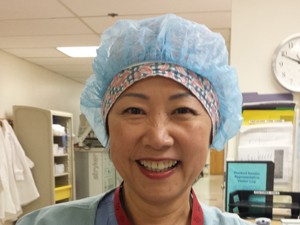 Ahn seems hard-wired to give back, a desire that she references many times during a recent phone call between shifts in the O.R. at Kaiser Permanente South San Francisco. The feeling was not new—she had volunteered in her native Korea, previously.

But back in 1998 the working mother who had transplanted to Northern California needed to find something she could do near her family.

Operation Access and Ahn were a match made in heaven: The nonprofit partners with Kaiser Permanente medical centers across the region to bring free surgeries to uninsured people. Ahn could simply go to the O.R. on the occasional Saturday to help out.

“Volunteering is a tremendous gift,” she explained. “My dream is actually to volunteer overseas one day.”

Ahn’s long-standing commitment to volunteerism—and the generosity she brings to that role—earned her Operation Access’ Spirit Award this past winter.

The Spirit Award is presented to medical volunteers “who display an exceptional ability to work collaboratively and rise to any occasion. Even amid the most difficult of situations, these volunteers graciously meet every challenge head-on, demonstrating the most honorable and joyous sides of human nature.”

Of Ahn in particular, the nonprofit stated in a recent newsletter, “Jungon’s work with our patients is infused with her goodwill.”

That goodwill is apparent as Ahn details her philosophy about the work—“I scrub, circulate, clean up, chip in anywhere”—as well as her thoughts about her fellow volunteers. “Everyone deserves this award. I’m not special. We are all the same.”

Ahn’s supervisor, Clinical Services Director Mary Justesen, said that Ahn is one of those nurses who seem to be able to put aside the other whirlwinds that surround her to focus on direct patient care. “She is one of the super angels on earth who was sent here to only do good work.”

For Ahn, her greatest reward comes from the patients, who she says are always “so thankful.”

One patient who springs to mind is a student from Eastern Europe.

His damaged hand caused him pain and affected his ability to write and work on the computer—putting his studies and future at risk. After the surgery, “he was so happy,” Ahn said.

During a typical half-day, she and her colleagues will see 3 or 4 people, and the surgeries are most typically for hernias or on hands, or sometimes lumpectomies.

Ahn guesstimates she has participated in about 40 surgeries over the years.

“They are simple cases, but they affect these people’s daily lives as they live in pain,” Ahn said. “We can make a difference.”