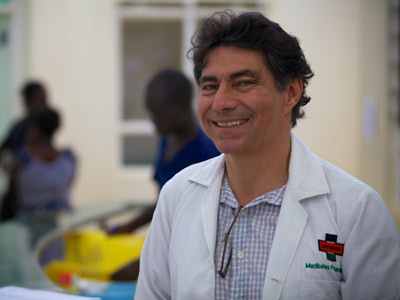 Dr. Garzon was just in Sierra Leone, where he helped set up much needed Ebola treatment centers.

In just about five weeks, Hernando Garzon, MD, did what Sierra Leone needed the most: He helped set up treatment centers for Ebola patients.

The Kaiser Permanente Sacramento emergency physician who is also director of regional emergency management was volunteering with International Medical Corps in one of the West African nations hardest hit by Ebola. Dr. Garzon returned to the United States on Nov. 9.

Although he didn’t provide direct patient care, his health was monitored for 21 days upon his return to the U.S. Dr. Garzon took his temperature twice a day and reported to the New York City Health Department until the end of November. He has been in New York, staying with family, and plans to return to California and to work in early December.

Dr. Garzon discusses his trip and his plans to continue helping with the Ebola crisis.

How did your trip go?

It went very well. I accomplished what I set out to do. We set up two treatment centers, both in western Sierra Leone, about two or three hours away from Freetown, the capital. These are areas that had seen the largest number of cases this fall. This was a huge undertaking because you’re essentially opening up hospitals. They were still being set up when I left, and they opened last week. With the surge of new cases in the west, these treatment centers are critical to the response.

It’s difficult when you help in a crisis, and you have to leave knowing there’s still so much more to do. The nature of this crisis is different because it’s an infectious disease outbreak, which is typically slower in onset and longer lasting than other disasters. With disasters like earthquakes, I saw things under control much quicker than in this situation. It’s better than it was, but the progress overall is slow.

Tell us about the progress.

During my time there, the number of safe burials was increasing dramatically. The washing and preparing of bodies is a sacred part of the ritual of traditional burials, and therefore  a common time when people become infected. Lately, there have been both many more safe burials and more treatment beds, with 500 to be added by this month. Coordination between the government and relief agencies was improving. I also saw many people being vigilant about hygiene and ‘social distancing’ — standing three feet apart and no handshaking. All this will help. I’m confident that the crisis will get under control, but not for many more months.

Did anything surprise you about Sierra Leone?

Despite this crisis, the society was still up and functioning. People were gathering in social places and going to markets. However, people who’ve been visiting for a long time period or live there said there were fewer people out and that people were less carefree.

Share one of your memorable moments from your trip.

Meeting with Samantha Power, the U.S. ambassador to the United Nations, and John Hoover, the U.S. ambassador to Sierra Leone, as well as leaders from the U.S State Department and the U.S. Office of Foreign Disaster Assistance. We had a chance to tell them what it’s like on the ground. We discussed the difficulties we were facing in hiring national staff and the challenges we face resulting from poor coordination at a national level. They relayed what we said to the presidents of Sierra Leone and the United States as well as the U.N. It was really tremendous to get the perspective of the relief workers heard at such a high level.

Do you plan to return to West Africa to help with the Ebola outbreak?

Maybe. I will definitely be involved from the U.S., working with International Medical Corp. I’m helping to put the training program we developed online. This program is designed for volunteers and staff going to work in Ebola treatment units. I’m also working with the WHO (World Health Organization) to develop a study on the effects of convalescent serum in improving the mortality rates in Ebola patients.

What do you want your colleagues to know?

This is a humanitarian crisis of global significance, and it’s important that as a country we do what we can to make a difference.  I’m grateful to work for an organization and a department that recognizes this and has been so incredibly supportive of this work.