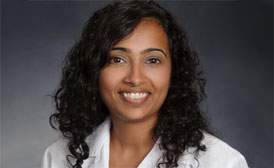 Although anxiety disorders generally can be treated, only about one-third of sufferers receive treatment.

And often those patients wait eight or nine years to seek professional help because they may not recognize when their stress has gone out of bounds, said Maria Koshy, MD, who works in the Psychiatry Department at Kaiser Permanente South Sacramento (Calif). Years after the first onset of increased anxiety, they are more likely to be functioning poorly, and they may have developed unhealthy coping mechanisms.

But don’t we all worry, at least a little? When does that worry become a disorder? To answer this question and more, InsideKP Northern California spoke with Dr. Koshy.

When does one’s worry become an anxiety disorder?

Anxiety has an evolutionary purpose that was integral to our survival as human beings. In prehistoric times, when our caveman ancestors were confronted with a life-threatening situation, it was the fight- or-flight response that saved their lives. These days we don’t routinely encounter wandering bears or hungry tigers, but we do have other stressors, such as deadlines, illnesses, relationship turmoil and so on, that produce a fight-or-flight response.

When you have an anxiety disorder such as generalized anxiety, the degree of impairment in one’s daily life as well as the duration of the symptoms are crucial in a diagnosis. Generalized anxiety disorder is a persistent level of heightened anxiety for at least six months. Symptoms include having trouble falling asleep or waking up, an excessive amount of time worrying about the future, suffering from tension headaches, feeling edgy or restless for no apparent reason, being irritable and having trouble concentrating on tasks.

Studies show women are twice as likely to have an anxiety disorder. Why is that?

There have been multiple observational studies that have shown this surprising statistic. Factors that could contribute to this higher level of anxiety include biological differences, namely fluctuating levels of estrogen and progesterone, especially during pregnancy, postpartum and menopause. There could also be a psychological piece, in which men are potentially less likely to report their anxiety because it may be socially less acceptable. Women are also statistically more likely to be victims of trauma, which may lead to an increased lifetime prevalence of anxiety. Lastly, there could be a social aspect to it because women’s roles have expanded. They are juggling home life and career, and attempting to be successful at both, which may leave them more prone to psychological distress.

What advice can you give someone suffering from anxiety?

Exercise is the first one. You can’t underestimate the power of exercise in reducing stress and altering brain chemistry to help us cope better. We recommend 150 minutes of aerobic activity a week, but try to fit it in exercise at least three times a week. Diet is also important. People prone to anxiety should stay away from caffeinated drinks because they can make you feel edgier.

Good sleep can also help. That means being consistent with waking up and going to sleep times and only using the bed for sleep. If you can’t go to sleep, then don’t stay in the bed, tossing and turning, because that can lead to a fear of the bed. Also, it’s important to limit daytime napping as this can interfere with nighttime sleeping. Expose yourself to natural light during the day, and then keep your bedroom quiet and dark.

Finally, learn about mindfulness exercises, which can help ground you in the moment and ease some anxiety that comes with worrying about the future, often the hallmark of anxiety disorders.

For a mild and moderate anxiety, therapy is recommended as a first step. Cognitive behavioral therapy, which teaches patients how to change their thinking and fears, has the best data for treating various anxiety disorders. For moderate to severe anxiety that leads to depression and suicidal thoughts, medications are important for recovery. Often a combination of medications and therapy work well together, with medications helping to ease symptoms and therapy addressing the coping skills as well as thinking and behavioral patterns that lead to increased anxiety.

To learn more about anxiety and prevention, go to kp.org.