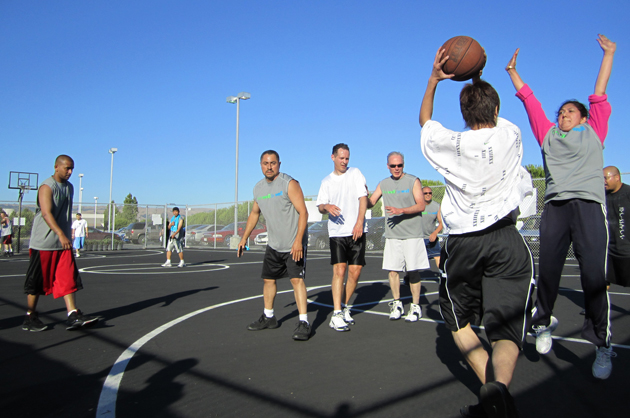 Basketball leagues at several KP Northern California medical centers give physicians and employees a fun way to stay active and improve their health. (Pictured above, players gear up for the annual GSAA basketball tournament at a lively pick-up game.)

But after going home and grabbing a bite to eat, he doesn’t land on the couch. Instead, he heads back out the door to a gym in El Cerrito, where he and a dozen other KP employees and physicians meet twice a week to play basketball. Members of the East Bay basketball league. 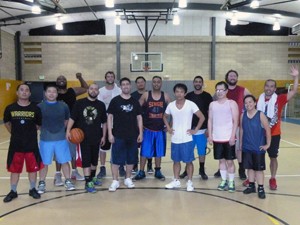 Across the bay, a similar scene is taking place at a community center in Menlo Park, where cardiologist Michael Ho, MD, and his colleagues from KP’s Redwood City Medical Center shoot hoops every Monday.

Drs. Deng and Ho say the leagues provide a great opportunity to get intense exercise on a regular basis. But that’s only part of the appeal. “When we’re at work, we’re all in our unique roles,” said Dr. Deng.

“When we’re on the court, everyone is just playing, and it’s a great feeling to get to know people in that arena.”

For the Love of the Game

Both leagues, plus a third in San Francisco, have been popular among physicians and employees in Northern California. In addition, the Greater Southern Alameda Area sponsors an annual basketball tournament. Participation in the leagues and tournament is free. To learn about getting involved, contact Physician Health and Wellness, Live Well Be Well, or Employee Wellness in your area.

Players are a diverse group, including everyone from nurses, pharmacists, IT specialists, and Environmental Services workers to physicians, technologists, and project managers. What unites them is a love of the game – and a desire to stay active.

“When I was younger, I didn’t want to lose,” said Jorge Palza, a medical assistant in the Cardiology Department at KP Richmond who started the East Bay league two years ago. “Now I just want to get a good run in, get some exercise, and make sure everybody else is getting a good workout too.”

Encouraging Employees to Prioritize their Health

Each league has its own distinct flavor. According to Dr. Ho, the word “league” is too formal to describe the Redwood City group.

“It’s really just a group of people who get together to play basketball.”

The East Bay league is known for a more competitive level of play, although Palza said, “As long as you know how to play the game, that’s all that matters.”

The San Francisco league is more structured. “Last year was the most organized we’ve been,” said Kush Raja, medical office controller at KP San Francisco, who helped start the league four years ago. “We purchased jerseys for the teams so it was easier to differentiate. We decided to play full court games, and we added paid referees at every game, with two refs at the playoffs and finals.”

Although Raja savors his team’s wins, what he values most is the teamwork and collaboration.

He added, “I’m the kind of person who needs something to get me out of the office or I would be here all day. Basketball is one of those things for me. It helps me prioritize my health.”