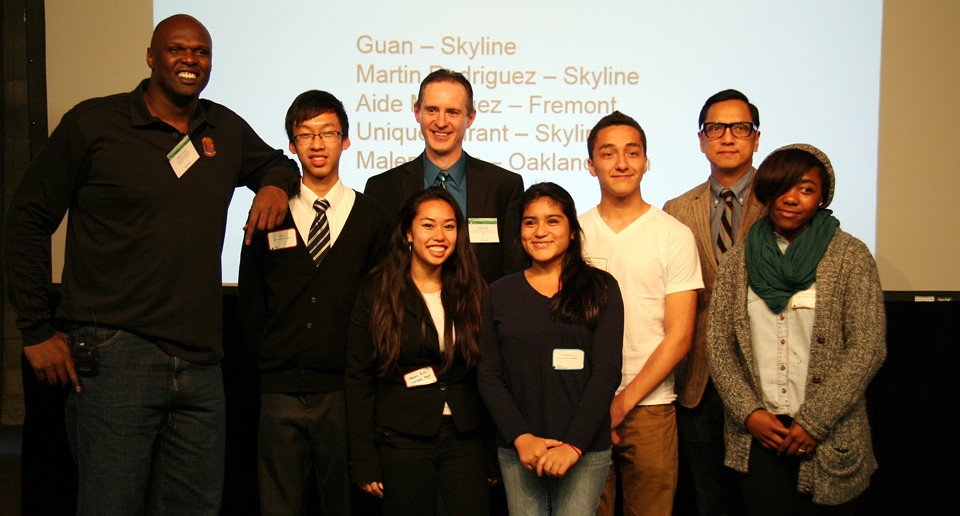 Kaiser Permanente shows its support of education in underserved communities by hosting a Junior Achievement Social Innovation Camp. Pictured above: The winning team with the judges, including KP’s Wade Nogy, (second row, middle).

Fifty high-school students from the Oakland Unified School District spent a recent Friday doing what many on the business side of Kaiser Permanente do all the time.

They tackled a problem, brainstormed solutions, settled on a plan, and then presented it. This day-long process took place at a Junior Achievement Social Innovation Camp, which was sponsored by Kaiser Permanente and held at the Kaiser Permanente Educational Theatre offices in downtown Oakland.

“This real-world experience is a unique way to cultivate creative thinking and problem solving in young people, and those skills are imperative in today’s work environment,” said Jennifer Scanlon, managing director of Community and Government Relations for Kaiser Permanente Northern California. “We’re excited to partner with Junior Achievement and other business leaders in downtown Oakland because, like our Thriving Schools initiative and longtime support of the Oakland Unified School District, this is another way we can promote college and career-readiness for students in underserved communities.”

Junior Achievement teaches young people about money management and the work world through school and after school programs for students in kindergarten through high school. 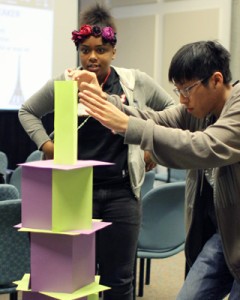 The event at Kaiser Permanente was a competition where the teens broke up into teams and then presented their ideas before a panel of judges, vying for first, second, or third places — and prizes ranging from $75 to $300 per person. Kaiser Permanente employees volunteered to mentor students during their brainstorming sessions, while others served as judges. Employees from other companies, such as Charles Schwab, Union Bank, AT&T, the Warriors, and Pandora, also volunteered.

Kaiser Permanente’s Jenny Chang was one of the mentors. The consultant with IT Strategic Services worked with the team that was tackling the problem of Oakland’s negative reputation. She helped them streamline their problem so they could better focus their solutions.

“I was able to help them frame their problem and build consensus among the group,” Chang said. “I found it really energizing to be around high-schoolers who could think critically about a common challenge that mattered to them and rally around a solution.”

She said was impressed with how they developed an idea and presented it to judges and a packed room — all in a few hours.

“I can relate to it. When I went through graduate school, I learned a similar process of innovation — where we brainstormed, researched, prototyped — but over eight weeks, “ said Chang, who received an MBA along with a master’s in Public Health. “This same type of approach is useful for solving problems that come up in the workplace and beyond.”

Wade Nogy, vice president of Strategy & Business Development with Kaiser Permanente Northern California, said he felt proud of the presentations he viewed as a judge in the finalist round. “This was a great way to learn about teamwork and how to build on ideas and brainstorm, ” he said.

As a member of the first-place team for a job-seeker app, Skyline High School student Guan Li said he learned about collaboration and working with others with different ideas from his own.

“I didn’t necessarily think of technology as a solution, but I had to be open-minded, and after talking with group, I saw how using an app is a good way to access a lot of people because so many people have apps.”